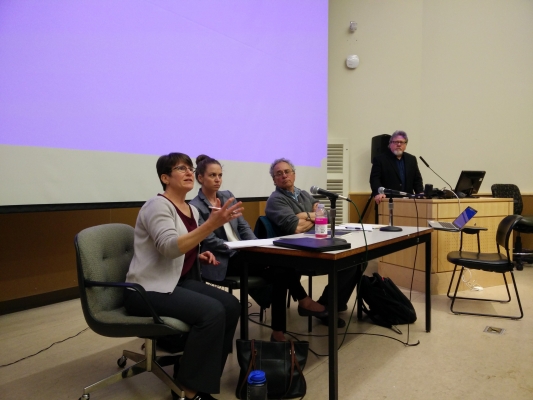 On Thursday, the political science department hosted its Spring Faculty Panel: Trump, Trade, Tariffs. During the panel, three faculty from the department, Jim Caporaso, Susan Whiting, and Caitlin Ainsley, discussed the arguments for and against protectionism and what the United States could learn from its history of trade wars.

Caporaso synthesized President Donald Trump’s feelings about trade wars when he remarked, “Trade wars are good and easy to win.” He then went on to detail the global perspective of the United States pulling out of the Trans-Pacific Partnership (TPP), stating that Trump’s unilateral focus on the balance of trade was “damaging to the U.S. economy.”

Ainsley, an assistant professor of political science at the UW, further detailed the cons of protectionism. She stated that pulling out of the TPP and being excluded from further trade agreements in Asia between big players was alarming since the United States “no longer has a seat at the table like everyone else.”

Successfully dismantling the multilateral regime that pervades the role of trade would sacrifice the stability of such an established system, but it could also allow the United States to have substantial influence in creating new trade rules to serve its interests. Caporaso backed this up, stating “if you can get a country one-on-one, then you can extract concessions from them.”

The GDP of the United States is large enough to nearly match that of major trade players as the European Union, which is a reason why Trump believes bilateral, or one-on-one, trade agreements would serve the United States better in the future. However, all three faculty members expressed dissent toward this reasoning.

Whiting, an associate professor of political science, stated that the United States’ trade negotiations with China were equivalent to “lobbing a grenade into the global trade order.”

The general consensus of the night was that even though Trump pulled out of the TPP in search of a better deal, it would be more beneficial for the United States to “call it a better deal and rejoin.”