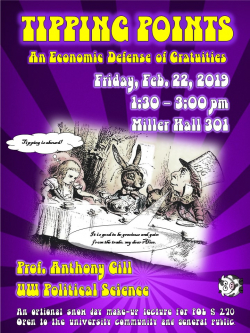 Why would anybody leave a tip at a restaurant to which they will never return?  How could this seemingly mundane question be related to teaching students about our political economy?

Prof. Tony Gill (aka Dr. T) has made it a point to leverage everyday experiences to teach students about some of the most important concepts in political economy, a method that earned him the UW Distinguished Teaching Award back in 1999.

Political economy assumes that political behavior and institutions can be explained by individual rational choices. Sometimes, however, people behave in ways that seem puzzling from a rational choice perspective. Customers are not legally obligated to leave gratuities. So why do people tip? Why don’t they just pocket the money as they leave the cab or restaurant, expecting to never return?

This puzzle has led a lot of people to conclude that tipping is a bad way to compensate employees. A number of prominent restaurants, such as Ivar’s Salmon House in Seattle and Chez Panisse in Berkeley, have recently adopted “no gratuity” policies by adding a service fee to the overall price of a meal. The reasons given are that customers don’t like tipping, wait staff earn more predictable wages (which are less subject to arbitrariness such as racism and sexism), and management has to do less paperwork.

But if there are such good reasons to eliminate the practice of tipping (for all involved), then why isn’t the “no gratuity” practice spreading like wildfire?  The working assumption of a political economist is that there must be a rational explanation.

In a recent peer-review article, Dr. T. uses the tools of political economy to argue that tipping has a number of unappreciated positive benefits. For business owners, tips help to solve a “principal-agent problem.” Owners (the principals) want their employees (the agents) to provide great service. Tipping provides an incentive for wait staff to do this even when management is not around.  In effect, the customer ‘monitors’ the wait staff, freeing up management to focus on other concerns. Customers benefit from tipping by creating an additional economic incentive for wait staff to consider their needs, and wait staff who are attentive to customer preferences make more money than those who are not.

Additionally, tipping allows for variable pricing compared to a no gratuity policy. Customers have more control over how much they pay for a meal. This can have the effect of attracting more customers to a business, which is good for the business and for employees.

All of these insights from political economy help to explain why tipping can be beneficial for all involved. But an important puzzle remains. Why do people tip after they have been served? The entire tipping system depends on not behaving in this way. Certainly, we all have a rational reason to tip if we expect to eat at the same restaurant in the future. But people often tip when they would appear to have no future reason to do so (e.g. tourists in large cities).

This puzzle creates an opportunity to introduce students to the importance of norms and reputation in society. If tipping is the right thing to do, then I ‘signal’ that I am not trustworthy if I choose not to tip. I may not care about the waiter, but I do care about the people I’m dining with. Thus developing a habit of tipping can have positive social and economic benefits that offset the short-term economic gains of stiffing the waiter. Through the example of tipping, students learn about important concepts that extend to many other observed behaviors. For example, why do people vote when the odds of that their own vote will decide the outcome are infinitesimally small?

Dr. T. has given his tipping lecture at universities, to public audiences, and on podcasts such as  EconTalk. He would be very happy to speak with your group or school. Oh, and no gratuity required.