Civil Rights and the Making of the Modern American State 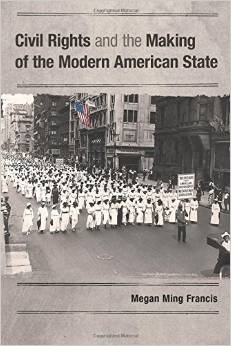 Winner of the 2015 Ralph Bunche Award for the best scholarly work in political science that explores the phenomenon of ethnic and cultural pluralism, American Political Science Association

Did the civil rights movement impact the development of the American state? Despite extensive accounts of civil rights mobilization and narratives of state building, there has been surprisingly little research that explicitly examines the importance and consequence that civil rights activism has had for the process of state building in American political and constitutional development. Through a sweeping archival analysis of the NAACP's battle against lynching and mob violence from 1909 to 1923, this book examines how the NAACP raised public awareness, won over American presidents, and secured the support of Congress. In the NAACP's most far-reaching victory, the Supreme Court ruled that the constitutional rights of black defendants were violated by a white mob in the landmark criminal procedure decision Moore v. Dempsey. This book demonstrates the importance of citizen agency in the making of new constitutional law in a period unexplored by previous scholarship.

Moore v. Dempsey made clear that states could not always be trusted to properly deal with matters of criminal procedure and that, when state courts acted as a menace to equal rights, federal courts could intervene. In the decades that followed, the Supreme Court used the precedent established in Moore to expand its reach through a string of landmark decisions that scholars would consequently call “the criminal procedure revolution.”

When asked about why she wrote this book, Francis answered: With this book, I hope to bring the political work and the voices of African Americans out of the shadows and into the forefront of how we think about political and constitutional development in the early 20th century. The NAACP’s campaign to end racial violence provides compelling evidence that political institutions can sometimes reflect the expressions of society’s preferences. Put simply: institutional development derives from the tension between powerful actors and those who contest and critique the projects they seek to implement. The effort that culminated in Moore v. Dempsey in particular, exemplifies how the NAACP created opportunities for black civil society to challenge Jim Crow (via criminal court trials) and how the organization ultimately pushed the federal government in a new direction.

Browse by fields of interest: