In _________ We Trust. Finding Where Division Ends and Where Unity Begins 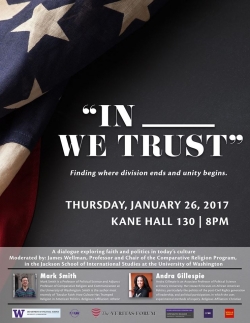 What, if anything, can people put their trust in? When does division end and unity begin? Join us, as we search together.

Institutional trust is in decline. The United States is growing increasingly paralyzed. From the perspectives of a secular humanist atheist and a Christian studying the divisive subjects of religion and race, the Veritas Forum at the University of Washington 2017 seeks to address these trends head on.

Moderated by: James Wellman, Professor and Chair of the Comparative Religion Program in the Jackson School of International Studies at the University of Washington

Mark Smith is a Professor of Political Science and Adjunct Professor of Comparative Religion and Communication at the University of Washington. Smith is the author most recently of "Secular Faith: How Culture Has Trumped Religion in American Politics." Religious Affiliation: Atheist and Secular Humanist

Andra Gillespie is an Associate Professor of Political Science at Emory University. Her research covers African American Politics, particularly the politics of the post-Civil Rights generation of leadership. She is the author of "The New Black Politician: Cory Booker, Newark and Post-Racial America" and has a forthcoming book titled "Race and the Obama administration." Religious Affiliation: Christian

Started at Harvard in 1992, Veritas Forums are hosted by coalitions of Christian fellowships at over 50 leading schools, with the aim of engaging students and faculty in discussions of life’s hardest questions. We welcome the diverse viewpoints of experts who wrestle with the big questions both intellectually and personally. Past presenters include UW President Ana Mari Cauce, Francis Collins, Peter Singer, Steven Pinker, Sir John Polkinghorne, and Cornel West. Further information can be found at www.veritas.org.