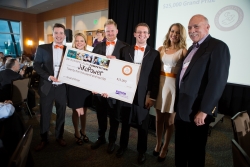 The University of Washington Business Plan Competition, run by the Buerk Center for Entrepreneurship in the Foster School of Business, provides the opportunity for students to present new business plans to Seattle area venture capitalist, entrepreneurs, and investors. The Business Plan Competition, now in its 19th year, awards $85,000 of seed funding to students’ new ventures. The competition is open to all students who are currently enrolled in a degree program in the state of Washington. The Business Plan Competition has awarded $1.2 million in prize money to 139 students over the entirety of its existence. This year, political science students, Jenny Wang, Marene Wiley, and Sam Wright, presented their business plans for Aquapel, JikoPower, and SafeFlame.

The company Aquapel patented technologies that create a self-cleaning system for solar panels. The technology creatively manipulates water droplets’ movement on the panel’s surface. Jenny Wang, political science major with a minor in entrepreneurship, joined the team’s chief scientist Di Sun at a team forming event because she thought that “self-cleaning solar power had a good market potential.” As the team’s project manager, Wang recruits team members, distributes workload, and manages deliverables. She also conducts research relating to the project, writes business plans, and she pitched the project in the Environmental Innovation Challenge (EIC), in which Aquapel was a finalist and award winner. Her political science major has provided her with the writing and research skills to succeed in her role as Aquapel’s project manager. After graduating from UW, Wang plans “to continue getting involved with the local entrepreneurial community” and to pursue a job as a business analyst in a venture capital firm. Assessing the value of the political science major in retrospect, Wang notes:

“My major has equipped me with a logical mind, which is the foundation of a variety of other skills like writing, analyzing, research and communication. For example, many people are good at ‘communicating’ or ‘talking to people,’ but to build a business case, you have to communicate in a logical way to deliver a concise and compelling message.”

JikoPower created thermoelectric generators to harness wasted energy from cook stoves and convert it into electricity to charge cell phones, LED lights, and other small devices. By doing so, JikoPower is able to provide safe, sustainable energy to people around the world. Marene Wiley, senior in political science with a minor in entrepreneurship, serves as the Chief Marketing Officer for JikoPower. She first learned about the project at an Entrepreneurship retreat and was “immediately fascinated by the project and its dramatic potential to improve people’s quality of life.” Reflecting upon majoring in political science, Wiley points out:

“Professors Tony Gill and Victor Menaldo were able to take the big topics of Economics, Politics, and History and break them down into simply what motivates people to act and react. Then they helped me discover how people’s incentives influence politics, economics, religions, and societal structure. These lessons are very easily applied to business, specifically marketing, and many other fields.”

After joining the team in November 2015, Wiley now works full time for JikoPower. The company’s initial target is Kenya, Wiley notes, “because 80 percent of people have cellphones but only 20 percent have access to electricity.” According to her, the product can play a critical role in the developing world as “access to a charged cellphone improves communication, business opportunities, education and provides access to life-saving healthcare.”

SafeFlame developed a 55-gallon drum that fuels a simple cook stove with vegetable and human biomass. Political science major Sam Wright first connected with his team through the “Business Plan Practicum” class offered by the Buerk Center for Entrepreneurship.  Wright, who also minored in entrepreneurship and pursued the Sales Program Certificate, helped the start-up with business development, research, and finding the company’s first pilot location: Guinea. “The international perspective gained from political science courses,” Wright notes, “empowered me to quickly research information such as the ease of doing business index (one of the indicators we used in evaluating locations).” After graduating from UW, Wright will join the Peace Corps as a youth entrepreneurship educator and small business advisor on the North Atlantic coast of Colombia.

These three student companies along with 33 others were evaluated by 300 judges who participated in assessing this year’s teams. After an initial screening round, a total of 36 teams participated in the investment round, a tradeshow-style event where each team interacted with the judges. The investment round was followed by a non-competitive coaching round, a sweet 16 round and a final round. At the end of this extensive evaluation process, the judges awarded the Grand Prize of $25,000, sponsored by the Herbert B. Jones Foundation, to JikoPower. Aquapel received the Smukowski Family Best Sustainable Advantage Prize, which recognizes a venture that has incorporated best practices toward resource reduction while bolstering profitability and cost containment. Finally, the team SafeFlame made it into the investment round.