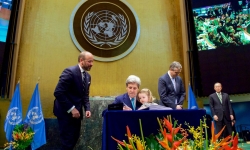 On June 2nd, Mark Smith spoke with Kaci Aitchison on Q13 News This Morning about the United States leaving the Paris Climate Agreement.

Smith explained that this decision signals to the rest of the world that the US leadership does not take climate change seriously. However, it is important to note that the US is not just represented by our formal leadership. We also have businesses, local governments, and state governments. Many of whom already claimed they plan to stick to the Paris Climate Agreement despite the withdrawal (Microsoft, Amazon, and Governor Jay Inslee of the State of Washington).

The President said that this agreement would harm the entire country and cause millions to lose jobs. Aitchison asked Smith's opinion on this statement. Smith said, "The jobs issue is complicated, if you look nationally right now we have more than twice as many jobs in solar energy than we do in coal. That difference is only going to grow over time.” However, he goes on to add that it is important to look at where those jobs are located. “A lot of those coal jobs are in states that are really crucial to Donald Trump's election. So in his statement yesterday, he specifically called out Youngstown, Ohio; Pittsburgh, Pennsylvania; and Detroit, Michigan. Three crucial, rust belt states that are very important from an Electoral College standpoint...Whereas the more solar energy dependent parts of the economy are more spread out nationally." According to Smith, there will be job implications on both sides. "There are winners and losers" and President Trump is taking a side in that dispute.

You can watch the full interview here.