Attorney General Bob Ferguson (BA, 1989) was the keynote speaker and recipient of the department’s Distinguished Alumnus Award. Read his biography below. Benjamin Lafferty Lennon was the undergraduate student speaker. 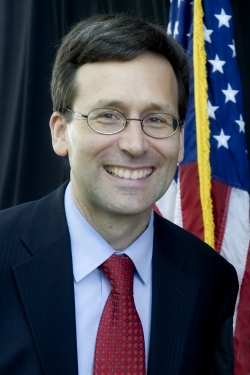 Bob Ferguson is the Attorney General of Washington State. He graduated from UW in 1989 with a major in political science and attended law school at New York University. After working as a law clerk for Chief Judge W. Fremming Nielsen of the Federal District Court for Eastern Washington and Judge Myron Bright of the 8th Circuit Court of Appeals in the Midwest, Ferguson worked as a litigator at Preston, Gates, and Ellis (now K&L Gates) representing individuals, nonprofits, local governments, and Washington corporations. Ferguson won a seat on the King County Council in 2003 and quickly became known for his work on health services for veterans and military personnel, open space preservation, mental illness and chemical dependency, and the management and oversight of county budgets and departments. Ferguson then won election to the post of Attorney General in 2012 and reelection in 2016. As Attorney General, he has prioritized consumer protection from fraud, advocacy for veterans and service members, supporting law enforcement, and promoting environmental protection. His office provides legal services to the legislature, governor, and state agencies throughout Washington.