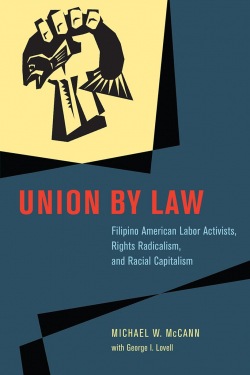 Starting in the early 1900s, many thousands of native Filipinos were conscripted as laborers in American West Coast agricultural fields and Alaska salmon canneries. There, they found themselves confined to exploitative low-wage jobs in racially segregated workplaces as well as subjected to vigilante violence and other forms of ethnic persecution. In time, though, Filipino workers formed political organizations and affiliated with labor unions to represent their interests and to advance their struggles for class, race, and gender-based social justice.

Union by Law analyzes the broader social and legal history of Filipino American workers’ rights-based struggles, culminating in the devastating landmark Supreme Court ruling, Wards Cove Packing Co. v. Atonio (1989). Organized chronologically, the book begins with the US invasion of the Philippines and the imposition of colonial rule at the dawn of the twentieth century. The narrative then follows the migration of Filipino workers to the United States, where they mobilized for many decades within and against the injustices of American racial capitalist empire that the Wards Cove majority willfully ignored in rejecting their longstanding claims. This racial innocence in turn rationalized judicial reconstruction of official civil rights law in ways that significantly increased the obstacles for all workers seeking remedies for institutionalized racism and sexism. A reclamation of a long legacy of racial capitalist domination over Filipinos and other low-wage or unpaid migrant workers, Union by Law also tells a story of noble aspirational struggles for human rights over several generations and of the many ways that law was mobilized both to enforce and to challenge race, class, and gender hierarchy at work.